The road rules in Tasmania help protect cyclists. Everyone has the right to use the road safely. Cyclists don’t have the protection of a vehicle but interact with them. And a bicycle is harder to see. That’s why distance makes the difference.

Drivers need to always be alert to cyclists who should be as visible as possible. Bright clothing and flashing lights – white on the front, red on the back – helps visibility.

Cyclists can travel two abreast, not more than 1.5 metres apart and take the whole lane if necessary to be visible. The new laws will help improve their safety and as well as pedestrian traffic.

If you believe a driver has been within the 1-metre or 1.5-metre passing distance, you can make a complaint to police.  A high standard of evidence to prove beyond reasonable doubt that a person is guilty of breaking the law.

Cyclists are at high risk of serious injury or death if hit at speeds above 30km/h. In our major towns and cities, pedestrians and cyclists represent one in four serious casualties. The Towards Zero – Tasmanian Road Safety Strategy 2017-2026 and the Towards Zero Action Plan 2020 – 2024 contains multiple actions that are aiming to reduce the likelihood of crashes involving cyclists in our urban areas.

More information for cyclists can be found in The Tasmanian Road Rules.

When riding across a crossing, cyclists must:

Drivers must give way to cyclists and pedestrians on a pedestrian crossing, marked foot crossing or children’s crossing.

To safely pass a cyclist, drivers can:

When passing a cyclist, driver must maintain a safe passing distance of:

The law applies to all roads, even where there are bicycle lanes.

Before passing a cyclist, drivers must:

If it’s not safe (for example the road is too narrow or the view ahead is not clear), then drivers must slow down and wait until road conditions change before passing safely.

When passing cyclists riding two abreast, drivers need to provide a minimum safe passing distance (either 1 or 1.5 metres) between them and the cyclist closest to the driver.

There are cyclist warning signs on roads popular with cyclists, to remind drivers of the safe minimum passing distances. 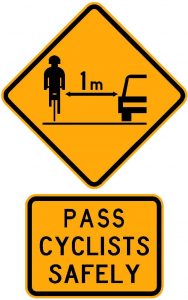